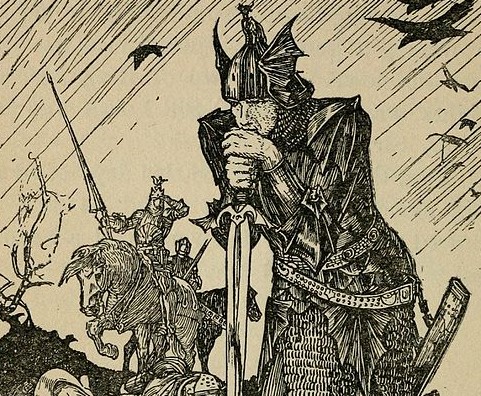 Get a longer weapon. That’s for starters. I’ll explain more in a second but, seriously, if you could pick one thing before going into a fight like this, that’d be it. If you’re fighting solo against more than one opponent, you need every little trick and twist to get the odds even slightly back in your favour. I’m going to spend some time today looking at what you should do and why.

So we said get a longer weapon. What’s the point in that? Well, there are a few recurring factors in basically any kind of sword fight and one is your relative measure to your opponent. You’re probably all sick of me saying that by now but if you’re not sure what I mean, click here. As should be fairly obvious by now, if you have a longer weapon, you can reach your opponent before they can reach you. Very useful in a duel, crucial when you’re outnumbered. Even if you can strike someone without them hitting you, you need to be able to hit them without their mates hitting you either. The longer your weapon, not only are you further away from the person you’re hitting, but also from everyone else as well. Just imagine the reverse for a second. Imagine you’ve got a knife against three guys with longswords. Not much you can do.

Fine, but what kind of long weapon should you use? All are good but the kind you pick will greatly impact how you fight. Let’s consider a spear first or anything you’re going to be primarily thrusting with. A spear is so nimble that you can usually trick your way past your opponent’s guard to stab them, and still have time to withdraw it and turn to the next person. You basically keep your distance as much as possible and stab the person closest to you. Those rushing in have a worse chance against you because they’re more committed to their trajectory so once you get past their guard, they basically run themselves onto your spear. And, Mordred aside, few people actually think that’s a good idea. From personal experience and that of others, most competent spear users can take on three, sometimes four people and still come out on top most of the time. It’s that much of a game changer.

What if you couldn’t keep your distance though? What if you were fully surrounded and they were closing in? There’s actually a completely different tactic you can use. If you cut with the sword along diagonal lines, not only are you covering yourself but the body mechanics of such a cut let you follow through with it and continue cutting without stopping. You can do this in a figure-of-eight to move forwards, or in a kind of loop to pivot to one side. This method is most famous in the style of the Spanish Montante. By virtue of having a big-arse sword and constantly cutting with it, you are able to more easily cover yourself from multiple directions as well as move into the measure of different opponents and injure them along the way. Obviously, being a cut-centric style, it works much better with a long-bladed weapon like a Montante, Spadone, Greatsword, (or dare I say Claymore…), rather than a spear. It also has the added bonus of being really intimidating.

The one catch to being a whirlwind of energy, constantly spinning around and cutting your opponents, is that it’s incredibly exhausting. If you don’t think you’re up to it or you want another option, thankfully there’s another tactic you can use. Now you can do this with any weapon, spear, Greatsword, sword and shield—you name it. It’s called feinting. Swordsmanship may be about not getting hit and only then hitting your opponent, but at its core, it’s basically the most complicated version of 3D chess you’ll ever come across. If you can outthink your opponent and either predict what they’re going to do, or better yet, control it, you’ve got an incredible advantage. Like having a long weapon, this is useful in a duel but even more so the more people you’re fighting. The catch is, if controlling how one person thinks is hard enough, controlling multiple people is even more difficult. If you’re very skilled in swordsmanship you can convincingly feint to one opponent, strike another and still cover yourself from the first (or a third)—but it’s easier said than done. Still, it is a valid tactic and one you shouldn’t be afraid to use if you can.

I mentioned sword and shield briefly and I think this is worth discussing just a bit here at the end. The problem with having a one-handed sword is that you need to close distance on someone with a longer weapon. You can’t really just stand back and snipe them. So yes, feinting works if people fall for it; and if you can move a shield around your body to cover multiple lines as you move around, you have a reasonable chance of not getting hit for a time. But shields don’t protect everything and they don’t threaten your opponents nearly as much as a sword when you pass by them. My experience with watching someone with a sword and shield against multiple people is against one or two, they’re very effective, once you get three or more though, they’re going to get hit eventually even if they take some of their opponents down. Feel free to disagree though.

Anyway, I hope that was interesting and a bit informative. You could say it’s better never to be in that situation in the first place but I think it’s always fun to stack the odds against you and see what you can do to bring them back in your favour. Small caveat here to predict a comment I know will come: yes, of course, armour is one of the biggest game changers of all and three unarmoured peasants with rusty swords can’t do much against a knight in a full suit of armour. Still, I’m considering the mechanics of how different weapons function with the underlying principle of hitting without getting hit. You can always add on more and more variables like, but what if those peasants all had war hammers, what if the knight didn’t have any weapons, etc., but with such an endless rabbit hole, where’s the fun in that?

(Picture of Mordred and Arthur sourced from Wikimedia Commons)