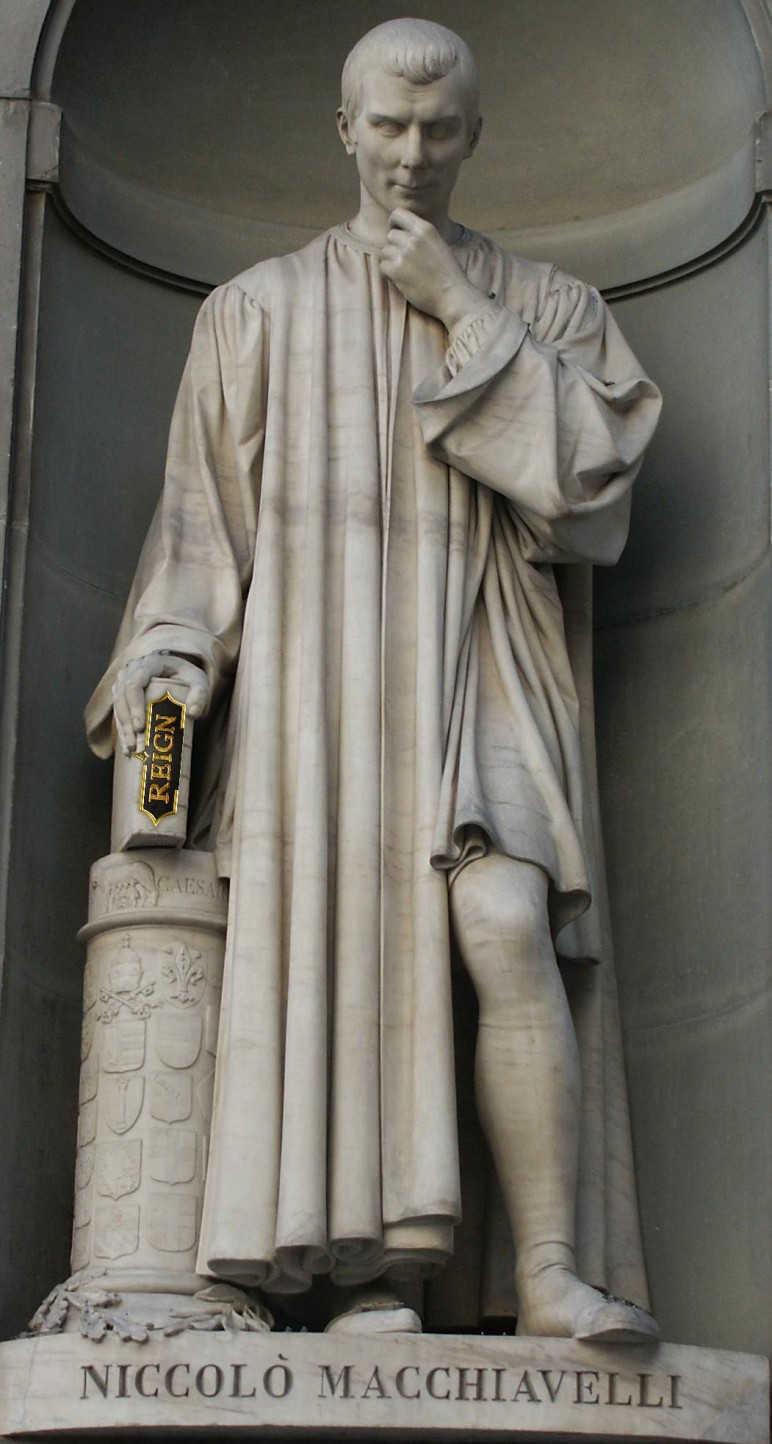 “It is much safer to be feared than loved”

Perhaps his most famous line. Why stop there though?

“for a man who wishes to act entirely upon his professions of virtue soon meets with what destroys him among so much that is evil.”

“It is necessary to be a fox to discover the snares and a lion to terrify the wolves.”

“men ought either to be well treated or crushed, because they can avenge themselves of lighter injuries, of more serious ones they cannot; therefore the injury that is to be done to a man ought to be of such a kind that one does not stand in fear of revenge.”

Niccolo Machiavelli, his very name a byword for amoral self-advancement, regardless of the cost. The patron saint of sociopaths, politicians and career capitalists everywhere. When you read quotes like these from his most famous work, The Prince, it’s not hard to see why. Is that all he is though?

The argument goes a little bit like this, Machiavelli’s The Prince is all about getting power for yourself. It casts morality aside, condemning it again and again as weakness which will only drag you down. as for vice, well, “it is necessary for him to be sufficiently prudent that he may know how to avoid the reproach of those vices which would lose him the state… [and only if it doesn’t endanger him the state] he may with less hesitation abandon himself to them.” In other words, screw people over to get ahead—that’s the way to live life.

The more I read Machiavelli though, the less convinced I am that this straightforward message is all there is to him. I’m struck by how often he tells us to ignore morality. Again and again, he keeps coming back to it. He reminds me of Marcus Aurelius who, deep wisdom aside, seems to keep telling us again and again not to fear death–indeed, usually multiple times per chapter. By the end of Aurelius’ Meditations, I’m starting to think he’s trying desperately to convince himself as much as anyone else. And I think Machiavelli is doing a similar thing. To me, The Prince reads like a strangely guilty journalist article: most of the key points are at the beginning to get you hooked, but he then spends the rest of it justifying why he wrote it. Let me show you.

In the very same chapter where we have the famous quote about the fox and the lion, Machiavelli says something most people overlook. And it’s profoundly interesting. He says,

“You have to understand this, that a prince, especially a new one, cannot observe all those things for which men are esteemed, being often forced, in order to maintain the state, to act contrary to fidelity, friendship, humanity, and religion.”

Can you see his pleading tone? Now this is towards the end of The Prince, and to me it reads very much as if he’s made all these clever, insightful arguments about how the world works and how you should act accordingly, but he has to keep coming back to why you should still follow them. He seems to be recognising that you’ll still have moral qualms despite everything he’s said so almost begs you not to forget his insights. Don’t believe me? Think he’s still pro vice and anti morality? Take what he says shortly afterwards:

“not to diverge from the good if he can avoid doing so, but, if compelled, then to know how to set about it.”

That is a much clearer indication, to me, that he doesn’t hate doing good or advocate being ruthless for their own sake—he’s more nuanced than that. Let’s unpack some of his previous statements.

Let’s take the fox and lion statement so often given, but with a bit of context:

Why are they compelled to act in this way? Let’s look back at the beginning of the chapter:

“Everyone admits how praiseworthy it is in a prince to keep faith, and to live with integrity and not with craft. Nevertheless our experience has been that those princes who have done great things have held good faith of little account… and in the end have overcome those who have relied on their word… there are two ways of contesting, the one by the law, the other by force; the first method is proper to men, the second to beasts; but because the first method is frequently not sufficient, it is necessary to have recourse to the second.”

I put it to you that Machiavelli sees the need to resort to force, to resort to all the ruthlessness he sets out in The Prince, not because he’s advocating one’s own gain but because it’s the surest way to protect that which is right. Perhaps you think I’m drawing a long bow on this one. Maybe I am, but let’s continue.

Let’s relook at one of the quotes I gave you at the beginning. Here’s it in full:

“for a man who wishes to act entirely upon his professions of virtue soon meets with what destroys him among so much that is evil. Hence it is necessary for a prince wishing to hold his own to know how to do wrong, and to make use of it.”

If you cut off the second half it looks like he’s just mocking people who want to be virtuous. The second half gives us the context however. The key word in The Prince, in my opinion, isn’t “fear” or “power”; it’s “necessary”. In the full quote above he shows us it’s the reality of the anarchic Hobbesian system—the “State of Nature”, or in other words, the fact that life sucks—that requires good people to do bad things in order to keep those they care about safe and preserve what is good. Go back and re-read most of the quotes I gave you so far. You’ll find he isn’t praising ruthlessness for its own sake; it’s just, in a word, necessary.

So what about his whole go off and be full of vice so long as it doesn’t endanger the state? Let’s look at that again.

“it is necessary for him to be sufficiently prudent that he may know how to avoid the reproach of those vices which would lose him the state… [and only if it doesn’t endanger him the state] he may with less hesitation abandon himself to them.”

For a man who prides himself (see his introductory letter to Lorenzo Medici) on being succinct and to the point, and who largely succeeds, this quote is strangely bloated with the passive voice and the subjunctive. Read it again. For someone usually so concise, it reads very much like he’s tip-toeing very carefully around something. I reckon he knows dear Lorenzo has a few vices of his own and is being careful not to offend him by telling him off for them. Instead, he gently suggests they don’t get in the way of ruling. Rather than the simple dichotomy of virtue = foolish, vice = wise which we could get from a cursory reading of The Prince, I think Machiavelli is much more subtle, recognising instead that though a ruler may want to be virtuous, they must not always act so, and that though that often means acting in otherwise “bad” ways, just doing them for their own sake can also lose you the state. Deep huh? Suddenly he’s not so simple and malicious as most people think.

Or maybe I’m just a Machiavelli fan-boy desperately wanting him to be something other than the power-hungry monster most people make him out to be. I’ll let you decide. Regardless, I’ve got one further thing for you, now I’ve fired you up with thoughts of back-stabbing and power-grabbing…

You’ve just finished watching Season 7 of Game of Thrones, yeah? House of Cards has already been released for the year too so now they’re both gone, where are you going to get your hit of intrigue and politics?

REIGN is a new card game, recently released and ready to take the board-game world by storm. If you’ve found this post interesting, chances are you’ll love REIGN. If you’re unsure if there’s any real alternative to Machiavellian politics, it’s the perfect game to test it out—you may be surprised at what you find.

I’ve got a bit more information about REIGN on my own website here but feel free to check out the official website as well. At the moment we’ve only got it out into Australian stores so far, so all you Aussies, head down to your local board game store and ask them if they’re stocking it (and if not, why not). For everyone, Australian or international, you can also order it direct from our website so really there’s no excuse.

All the best and, remember, there can be only one…

(The Prince quotes from the W.K. Marriott translation, available online. For those of you wondering why I haven’t been blogging so much recently, this is largely why. Will keep blogging, just a bit less frequently. Slightly modified photo of famous Machiavelli statue sourced from Wikimedia Commons.)

8 thoughts on “Machiavelli—Long may he REIGN!”