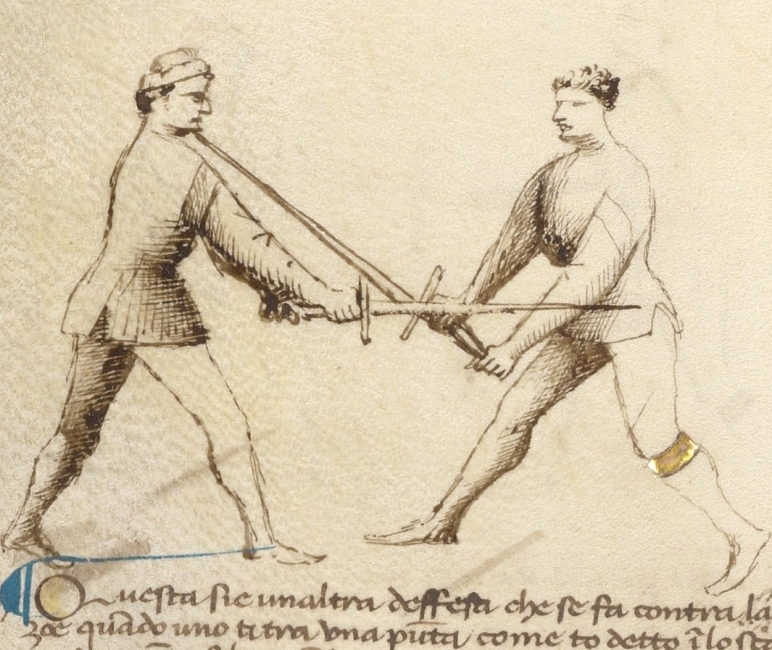 There’s something many wise instructors in the modern day and the past taught as a good rule for thrusting. Some would say only thrust in this situation, while many would say it’s an ideal situation to be thrusting in. Some don’t mention it at all but I think it’s definitely worth addressing. So, without further ado, let’s find out what it is.

A common phrase for it is a ‘thrust with opposition’. Basically it means thrusting while you control their sword as well so they can’t thrust you in return. Sounds great, doesn’t it? And it is. It’s ideal. If you can stab someone without being stabbed in return, well, that’s the whole point isn’t it? It generally means that the lower third of your blade (the strong) is touching the upper third of their blade (the weak) and maintaining such a position that their point isn’t aimed at you. That way, they can put as much force into it as they like but the angle you’ve created combined with the mechanics of the blades makes it very unlikely they can thrust you. All you have to do is get your point online while maintaining this position and then thrust them. Easy.

Well it’s not quite easy, for many reasons, which is why I’d call it a goal rather than the only time you can thrust. It’s certainly a safe time to thrust and I’d say thrusting is inherently more dangerous than cutting—though not probably for the reason you think. When people talk about the danger of being cut vs being thrust, they usually mean in terms of the harm it could do you. I’m talking about stopping power. Simply put, a cut has a better chance of catching their blade than a thrust does. If they attack you at the same time that you attack them, you have a better chance of intercepting their blow, especially if you’re attacking in a similar line so the attack is mirrored. A cut has inherently defensive stopping power in the line that it’s attacking. A thrust has virtually none.

So if thrusting doesn’t really protect you, why would you ever thrust if you weren’t thrusting in opposition? There’s a few different situations but they come down to the same idea: while mechanical defence (i.e. defending yourself with the sword) is often ideal, psychological defence, while harder to be sure of, is often good enough. If someone has just made an attack, often they will then withdraw to attack again. On their withdrawal, you usually have a tempo to thrust. Depending on how trigger happy they are and if their tip is facing you, it might be dangerous but sometimes you can get a good thrust in at this moment. Another time, honestly, is when you know you’re quicker than they are and you snipe a close target. I love sniping hands and forearms for this reason. It doesn’t matter what sword you’re using or if you’re cutting or thrusting, often someone’s forearm is the best target. I’ve found if you have an aggressive point-forward guard and they try and be defensive and parry, you can often snipe their arms fairly safely. Again, not so much if they’re also point forward and trigger happy.

But there are other times you don’t need to be thrusting with opposition too. Say, for example if you’ve trained a really good displacement with your offhand if you are using a 1-handed sword. I’d much prefer to do this in gloves for obvious reasons, and not against anything good at cutting, but against thrust-centric swords with happy thrusters, it can work well. Basically, your offhand catches and displaces their thrust either as you thrust or as your parry. It doesn’t always work, but when it does, it works a treat. Same for grapples and weapon locks. If you can successfully grapple them or lock their weapon with your offhand after parrying it, great. By all means thrust them. Though I’d say what you do at this point matters less than that you were able to grapple them so to me it doesn’t fully count. The other thing that really does count though is the length of your weapons. It’s similar to thrusting if you’re quicker than them. If you have a spear and they have a sword, you’ll probably be fine. If you know what you’re doing and you have even a bit of reach advantage, it’s still probably worth a shot. So, if you’re doing mixed weapon sparring, having a longer one makes thrusts without opposition even safer, and possibly even preferable.

How have some systems gone about implementing this though? There’s many different ways of applying the idea of a thrust with opposition. Here are a few of my favourites. The German longsword tradition generally starts with cuts but sets up a thrust if the first cut doesn’t succeed. By winding after the initial cut, not only do you keep the initiative and arguably steal a tempo from your opponent (or, probably more accurately, render their next attack unlikely to succeed), but you also set yourself up for a thrust. The German system looks like it’s cut-focussed, and I’d say it’s fair to say it is, but it’s deceptively pro thrust as well. By winding, you create a near-perfect opposition (your strong to their weak) while keeping your point online for a thrust. It might not be the quickest thrust out there, but it’s a very safe way of applying this principle.

While the German tradition sets up a thrust after the attacker’s initial cut, the Italian longsword tradition does almost the opposite. Fiore is big on parrying first and then riposting. One of the first ripostes he shows is a simple parry to the left to defend against a downwards cut on that side and then springing forward with either a cut or a thrust—depending on what you prefer. He defends, captures the bind, and then thrusts—as opposed to cutting, capturing the bind and then thrusting. So you have options either way, whether you thrust after attacking or defending but it’s interesting both focus on cuts first.

Now Fiore has a counter to someone thrusting at you too. It’s really interesting. Depending on how you read it, it could me a few things—his ‘exchange of thrusts’—but it’s clear he parries the thrust, displaces it and then stabs, with his sword still between him and the displaced thrust. Though he mentions you can thrust from guards like long point and fenestra, he also says they’re good for ‘testing’ other people’s guards and doesn’t spent much more time on it. I’m inclined to think he didn’t thrust people unless he was confident he either had a good bind, displacement, or he could get away with it.

The last one I’d like to talk about is Spanish rapier. I’m not an expert but I know enough to make this point. Spanish rapier has your forearm extended at 90 degrees pointed straight at their chest or head. In this angle, what would be a killing blow is also one of the closest and their system for deciding priority is really interesting. Essentially, the two blades get close to each other and circle back and forth until one of them is on the top, and can thrust from that position, creating a bind on their opponent. The idea is you have greater leverage not primarily from strong/weak parts of the sword but from your body mechanics—being on top giving you the advantage. Even though the system might look like it’s a free-for-all, it’s actually using, in its own way, a form of thrust with opposition. Food for thought.

So, to my mind, the idea of thrust with opposition should be considered and studied almost as its own topic. It seems a really fruitful aspect to study across systems because most systems seem to address it in some way or another. While there are other ways of thrusting fairly safely, it ultimately, in my mind, should be the thing you judge any other thrust against: do I feel so safe with the thrust I’m about to do that it feels as safe as thrusting with opposition? Have I really got the tempo, have I really controlled their thinking? If so, then go for it, but if not, maybe rethink your plan. There’s a lot more to thrusting safely than it first appears.