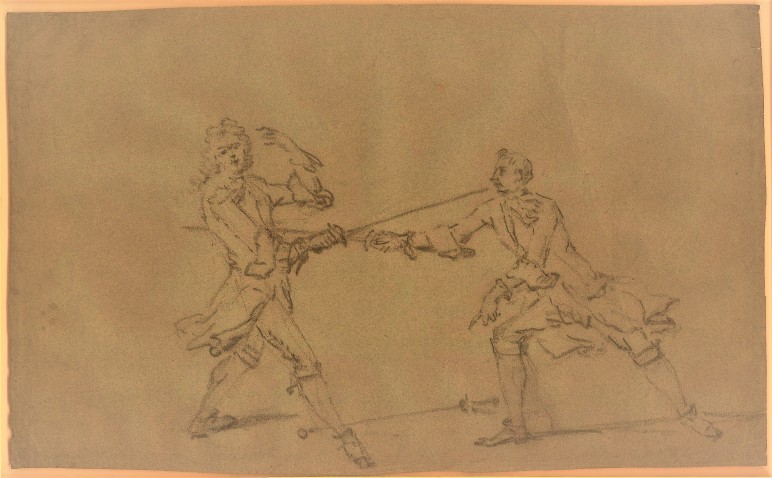 What’s the safest thing you can do in sword fighting? Surely it’s to block all the time. Surely if you do nothing but block, you’re safer than if you do anything else. Yeah, nah.

So a thing I find many new swordsmen, or many amateur swordsmen, do is block too much. It doesn’t sound like it makes sense, right? How can you block too much? Generally speaking, if your opponent is hitting you, blocking is often one of the best things you can do. However, what many people I like to call “panic blockers” do is they block one strike but then instead of taking advantage of the situation—instead of attack or manipulating their opponent’s blade, they just worry about the next attack coming at them and try to block that instead.

Now, you might think that’s still sound. If someone’s hitting you a second time, you should block it as well, right? Wrong. You should keep yourself safe, yes, but a part of keeping yourself safe is making your opponent fear you. If you block their attack and don’t riposte—or do something equally vicious—you’re basically telling them they can attack you safely with no fear of reprisals. Ironically, what makes a good fencer repeatedly strike at a bad fencer is often because the good fencer realises the bad fencer is just panic blocking. If I know you’re so focussed on not getting hit that you aren’t going to try and hit me, we can keep playing the game of me trying to hit you until I succeed.

It’s basically a paradox. The more you try to protect yourself through only defensive actions, the more aggressive your opponent is likely to be. And the more aggressive they are, the more times you both roll your dice—and if they come up short, the worst case is you block them, but if you come up short, you get hit. And it can become a really bad spiral. Someone who got out-thought once or twice might resort to panic blocking, and then they end up getting attacked more, and then they get hit even more, and then their confidence goes down even further and they get hit even more again. The solution, even when you’re frightened, is to remember a little thing called tempo.

Tempo just means time but within the context of fencing it means a few things. It can mean the principle that whatever you can do in a period of time, I can do that as well—or something that takes just as long. Or, it can be more specific and relate to the time it takes to make an attack. Approximately, if you’re at the right distance and in a good guard, you should have enough time to block someone’s attack when they make it. But tempo also has another nuance to it. We can talk of tempo relative to each opponent. We can say, if someone attacked, it was their tempo, and it implies during this time the opponent should focus on defending themselves. But a principle of many systems is that once one person has attacked, the tempo transitions—if but for a moment—to their opponent. The person being attacked now has half a second to do something aggressive in turn.

Rubbish. Some people are just aggressive. That sounds very 18th Century Britain—“You have your attack and then I’ll have mine,” but it’s really not. It’s not about politeness—it’s about energy, and it’s about body mechanics. Roughly speaking, the person who has attacked has probably put more of their body’s potential energy into a kinetic explosion, which is great if it hits but if it doesn’t, they have less energy than their opponent has for a followup. Also, though there are ways you can mitigate this, after an attack you’re usually more vulnerable than your opponent is if they’ve parried correctly. From the original attacker’s perspective—they have good reason to use the next tempo (most of the time) to act defensively—and from the original defender’s perspective—they have good reason to use the next tempo aggressively.

Panic blockers fail to keep this aspect of tempo into account. When someone attacks you and you block it, they’ve given you half a second to try to hit them. If you’re not sure when to attack, if you’re naturally defensive, they’ve given you the answer—a real answer—for when they’re most vulnerable. Now that’s not to say a great swordsman can’t think three or four steps ahead and set you up to fail on your riposte—but generally speaking people who have trained to riposte are going to fare a lot better than those who haven’t. So, to all the panic blockers out there—train yourself out of this as quick as possible. Blocking is great, but if you don’t have a riposte—even a simple riposte, even if you only have one—without it your block may well just set you up to be struck by the next blow.

And yet, to those of you who don’t think you’re a panic blocker—I’ll give this warning I give to myself. Be aware in your next fight, your next few fights—especially against fighters who challenge you—of how often you actually riposte. I find I can see panic blocking in others, much more easily than I can see it in myself…

And to round this off—people can always use footwork instead of blocking or as well as it. That certainly helps. The more tools you have, the harder it is for someone to use one of them against you. But the principle still stands. If all you do is block and retreat—you’ll make an opponent into someone who attacks and charges.

Regarding that old adage “attack is the best form of defence,” well, it isn’t necessarily. But it’s a part of it. I’d rather take a leap from Hegel here and say you have being aggressive and you have being defensive and both are imperfect on their own. What is perfect is the balance of both of them—which will change uniquely for each situation you find yourself in. So get fighting, and carpe tempo.

(Image sourced from the British Museum)