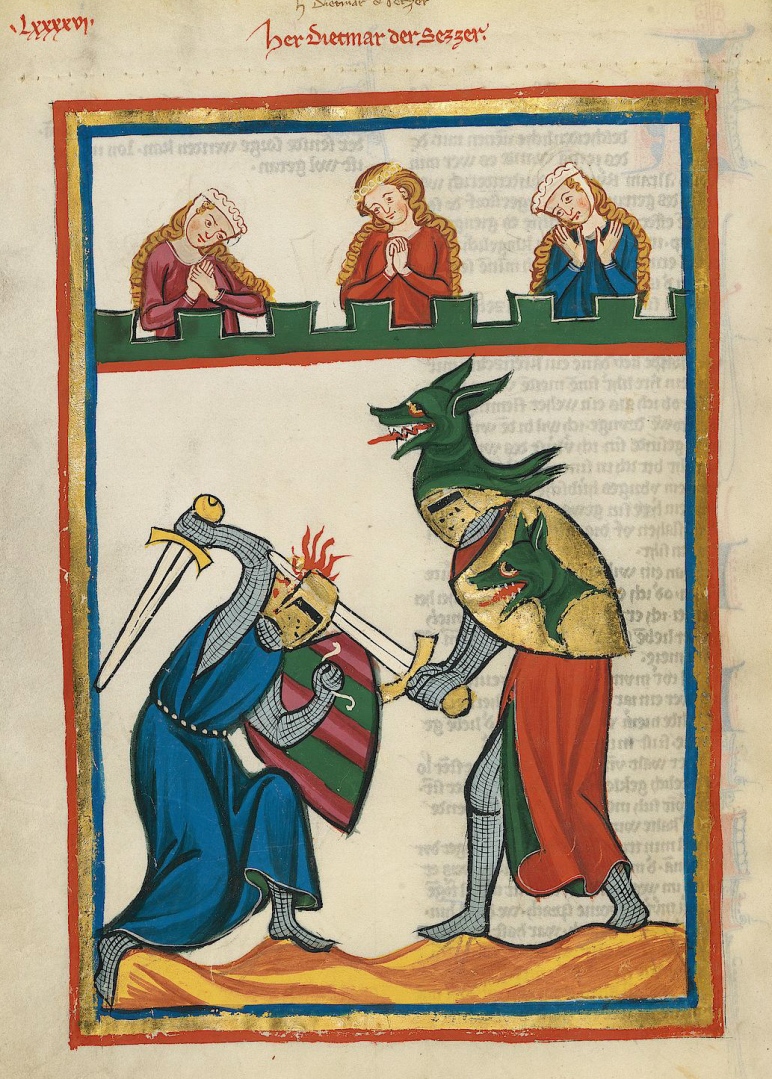 So I was re-watching Game of Thrones these last few weeks, you know, as you do, and I saw an interesting fight scene. It reminded me of something I’d learned from studying primary sources in history from a lot to of different cultures and times. Basically, fighting in reality doesn’t play by nice rules where you can guarantee what’s going to happen if only you’re wearing the right stuff and you block with the right guard. Life is complicated. And sometimes things just fail.

Let’s consider the fight scene itself for starters. *Spoilers!* Though if you haven’t seen Game of Thrones by now you deserve for it to be spoiled (if it hasn’t been already). Anyway, the scene I’m talking about is when the Hound is fighting the leader of the Brotherhood (Beric Dondarrion) in their cave. Remember, the Hound hates fire and the other guy has a flaming sword? So anyway, they fight for a bit and eventually the Hound is above his enemy and strikes a powerful downwards blow at him. Dondarrion blocks with, effectively, the guard of St George, a perfectly good guard to block a strike from above. And you know what? Despite using a correct guard to defend himself, it doesn’t matter, the Hound’s sword breaks Dondarrion’s sword and cuts down his shoulder into his heart. If you’re not paying attention, it just looks like the Hound bested him, but the fact he broke Dondarrion’s sword even though he used the right guard, shows just how unfair fighting can be.

Let’s take another example from Game of Thrones before moving to the murky world of history. Later in the series, Brienne of Tarth has been given a “Valyrian steel” sword by Jaime Lannister. She also cuts through someone’s sword when fighting them on horseback. The implication there is that her higher quality sword has a chance of breaking normal ones. And this is fairly accurate when we consider history. Not all steel was of the same quality in the Middle Ages and if you were some unlucky peasant given a 50 year-old sword and taught briefly how to swing it, a knight coming along with the latest in purified steel was likely to have a harder, stronger sword less likely to break. So wealth does probably pay a part, though given the legend of King Arthur usually has him breaking his first sword before getting Excalibur, you could argue even knights and kings were not immune to the odd broken sword.

Let’s head over to armour, briefly. If we go right back to the Iliad, we have a wealth of information about fighting and killing. The actual plot of the Iliad could be given in about 3 chapters, probably—the rest is the violent to and fro of war. We hear a lot of interesting things in it though. Sometimes people’s weapons fail but often it’s the armour itself that fails. Let’s take the case study of a belt. You wouldn’t think a belt would be the difference between life and death and yet Agamemnon’s belt saves him from Iphidamas, bending the tip of the spear that struck it. Conversely though, Ajax the Great/Telamonian Ajax kills Amphius by stabbing him through the belt. We have two people, both with a form of armour, both stabbed in their armour and in one case it saves them and in another it doesn’t. Both entrusted their life to something that was better than nothing but could very well fail. Now you could say, again, Agamemnon was probably richer than Amphius so he had better armour, perhaps, but that doesn’t negate the possibility that armour could fail, merely reinforces the disparity between better and inferior quality metal.

But there’s another way to read all this, Daniel. People’s weapons and armour always happen to break in order to suit the designs of the one writing the story. How convenient that it’s Agamemnon’s belt that saves him, he’s a main character, so of course he’ll survive but some no-name will be killed when the same thing happens to him. Same for the Hound or Brienne of Tarth, these people have a role to play later on so of course you’re going to find some way to keep them alive. Besides, all you’ve given me from history so far is myth and legend. I don’t believe in the historicity of Homer’s Iliad or the legend of King Arthur. That’s totally fine. I’ll give you it all—plots and character necessity, the whole lot. The legends may be nothing more than pure fantasy in the minds of people who wrote them but…

But every story must be built with something. Even if you make up the plot, the characters, some magical sword, you need to pad it out with detail. And no-one makes up all the detail just from their own mind. Everyone builds upon their experiences and what they’ve learned about. This is why we study myths and legends, we realise they might not strictly speaking be true, but the wealth of knowledge they contain about the societies which made them is invaluable. Just think about how much less we’d know about Bronze Age Greece without the Iliad or Dark Age Ireland without the Tain. Think back to the picture I used at the start of this blog post. We have a Medieval manuscript where one knight cuts through the helmet of another. You can try and isolate it as yet another example of someone embellishing without really knowing what happened but many manuscripts are full of such depictions. The more we cross-reference our sources, the more we see the same problems emerging; armour won’t always protect you and weapons will sometimes break.

So fight your best by all means, but it may not be enough. Perhaps this is one reason why most warrior societies were deeply superstitious. From the Homeric Greek world to the Romans, from the Vikings to Medieval Christendom, most people had a belief in some kind of supernatural force being the ultimate decider on who lives and who dies. You can pay for as much training and quality as you like, but you can’t control chaos, and if you can’t control chaos, maybe it’s better to believe in fate…