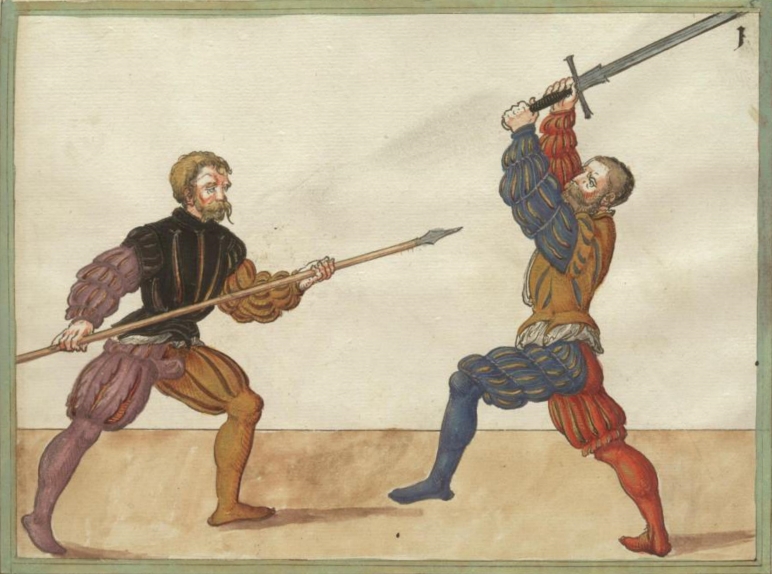 Is it better to cut someone or stab them? If you stabbed someone in the Medieval Ages they’d almost certainly die but if you chopped off their arm they were less likely to hit you back. I think this is actually the wrong way to look at the debate, in all honesty. To see the full benefits of cutting and thrusting we need to take a step back (as it were) and consider them from a martial perspective; how they function as complementary techniques rather than just the wounds they can inflict.

The key point in all this, in my opinion anyway, is that you use either depending on the situation and what your opponent is doing. If you have someone who just wants to rush you, having some kind of tip forward guard—like Long Point, Ox or Plough—can stop them in their tracks, one way or another. Conversely, if you have someone cutting at you, counter cutting their attack is a safe method of defence so long as you gauge it right. By counter cutting I mean mirroring their attack back at them to form Silver’s “true cross”, though a rebatta works well too (but we won’t get into that here). The threat of a thrust or the actual force of a cut can both be valid defensive choices depending on what your opponent is doing.

But cutting and thrusting are even more interconnected. There are some times where it is ideal to move from one to another because of how your opponent reacts. To go back to my Ox Guard example from a few weeks ago, you can have the threat of a thrust at the opponent, and follow through if they do nothing, but if they cut into your guard you take the blow and use it to power your sword into a cut. You either thrust or cut depending on how your opponent reacts. That is probably the clearest example I can give you. One that goes cut-to-thrust rather than thrust-to-cut would be winding at the bind after your initial oberhau in the German system. It’s literally cutting at your opponent then changing your guard if they block it so you can then stab them.  And following it further, depending on how they counter your wind, it might power you into another cut (and so on). Especially in this Ox/cut/wind set of German techniques, you seem to almost oscillate between setting up a cut or a thrust in reaction to what your opponent does until one of you makes a mistake or is out-thought.

Of course there are some situations where you can do either depending on your preferences. So many blocks give you the option to cut or thrust at your opponent once you’ve dealt with their attack. In fact, Fiore’s sword in two hands Gioco Largo section has the very first master literally saying after you cross swords with your opponent, you can either cut down at them (fendente) or stab them in the face; either will do. There are some situations where your option to attack can be either a cut or a thrust and it doesn’t matter which one you do, so long as you do something.

You can argue, of course, that with more specific weapons or defensive equipment this changes the game. It does, slightly, but not the underlying principles. If, for example, you fought someone in armour who either had no helmet or their visor was up, it would make more sense, after successfully blocking their attack, to thrust into their helmet rather than cut down at it. If you had a falchion or a messer against an unarmoured person, you’ll probably just cut. Rapiers  are specialised to thrust but can do both, thankfully. In all cases you use the same underlying principles: you can still point it at your opponent as a deterrent to charging at you, you can still beat or cut into an opponent’s blade then thrust or use the force of their blow to power your guard into a cut. And, taking the exception of the smallsword (and sport fencing) to its battlefield evolution in the spadroon, for all its faults at least the spadroon tried to address the underlying martial reality that it was preferable to have the option to do both.

I hope I’ve given you a good overview of how cuts and thrusts work together. You can use them defensively to defend against different things and with some guards or techniques you can have the option to switch between them depending on what your opponent does. Both can be made as an attack as well, though some weapons are more specialised for one or the other and things like armour affect your decisions too. And it is all these factors, playing into each other, that make me think we shouldn’t consider cut and thrust as a debate over which causes a worse wound, but as equally worthwhile, mutually dependent aspects of the art of sword fighting.